You may be going to see music with the wrong people. 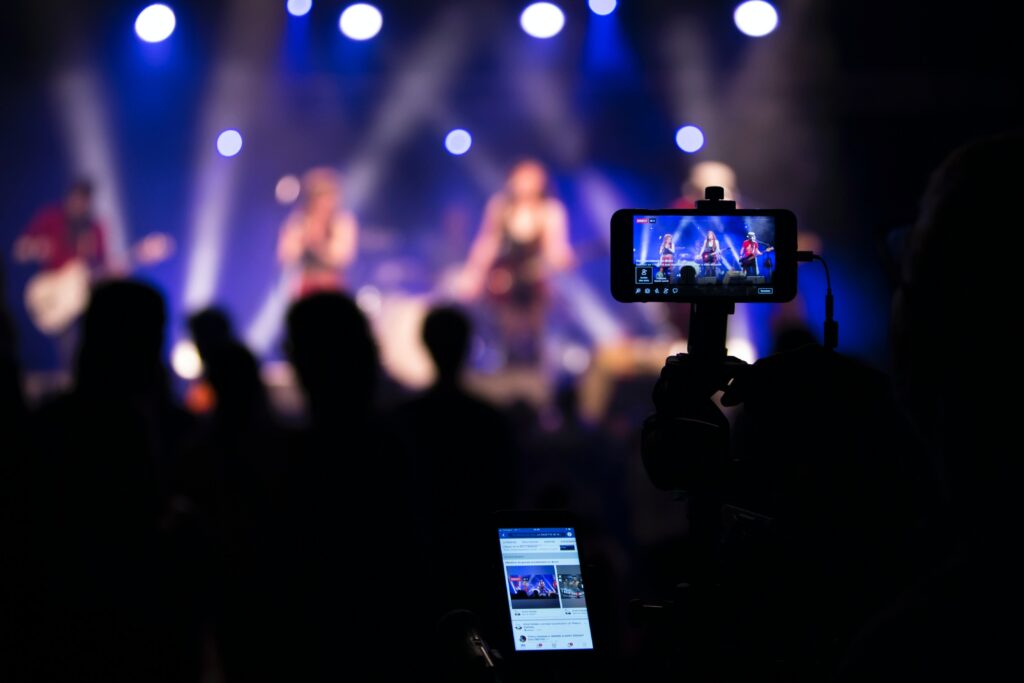 Remember when we were stuck indoors, or at least mostly indoors for the better part of two years? And isolated? Well, during that time, we forgot how to be with people, and be present.

You’re right if you are thinking that cell phones and social media were distracting us well before the pandemic. But after the pandemic, we all were so excited to get back out with our people, the people who meant so much to us, and do things! AnyTHING. We said we were sick of screens and sick of livestreams and Zooms and we wanted connection.

Well, I’m convinced that was a story we told ourselves. Because if there was any time to show up and really live and absorb what is around us, it would be now, because we remember how bad it was to not be able to, right?!! Unfortunately, I think we fell deeper into some bad habits with the pandemic and they have continued to grip us. Good news-I think we can collectively pull ourselves out. But like with anything-we have to acknowledge there is a problem before we can make change. In this context, when I say ourselves, I mean music fans.

I am a huge music fan. Here’s a link to the analog list of all of the festivals and concerts I have ever been to that I can remember. Re: this list: This is the first time I am sharing it publicly. I created this in Notes on my phone and have added to it. It’s in partial chronological order from when I started writing things down and in no particular order, for the ones I had already been to. I started listening to my parents’ records when I was six and fell in love with music, its effects on me and was and am still fascinated by the common influences tying all music together. I have been to a lot of concerts big and small, intimate and sprawling, some camping in a dirt field, some cushy in VIP. I snuck out to see the Dead at 15 and got grounded, moshed to Ministry, without fear, a small chick half the size of the big sweaty men around me. I recently saw an incredible LED-masked electronic artist (Deathpact, which may or may not be one of the members of Daft Punk) on New Year’s, sandwiched with tens of thousands of my closest ravers. In between, there have been hundreds of shows I have been to solo, with a partner and friends, across genres and venues– of rock, blues, indie, hip hop, electronic, country…I have Coachella’d, Bonnaroo’d, Troubadour’d, 9:30’d…Anyway, I have seen how we music fans behave at concerts. And lately, it’s hurting my being, but the point is that it is probably hurting yours too, even if you don’t immediately recognize it. This sentiment was underlined for me by the Dazed article which discusses concert behavior trends from the POV of the artists on stage.

You may be going to see music with the wrong people, and one of those people could be you.

What do I mean by “wrong people?” It sounds harsh and judgemental, like your parents saying that you shouldn’t hang out with so and so because of the car she drives or the rips in her jeans or because she (gasp) smokes weed. Nothing like that. Much worse. You could be–or one of your concert-going group could be–limiting the positive effects of the music. And these positive effects are big. Mental health big.

There are countless articles and heaps of academic research on the positive effects of music on the brain. It’s one of the reasons I founded Vinylly  (no better business partner than science to support your mission) to drive real connections based on something that actually makes you happy. A recent study titled “The Social Neuroscience of Music: Understanding the Social Brain Through Human Song,” cites increases in dopamine and oxytocin and reductions in cortisol tied to the effects of music.

In particular, there is evidence to suggest that attending live music events can have positive effects on a person’s mental health. Live music can serve as a form of emotional expression and release, allowing us to connect with the music and the emotions it evokes. Research has shown that participating in live music events can lead to increased feelings of joy, pleasure, and excitement, as well as reduced stress and anxiety. Additionally, the rhythm and melody of music can have a calming effect on the body and mind, and can also serve as a form of distraction from negative thoughts or difficult emotions. Live music events can also be an opportunity for people to engage in self-expression and creativity, which can be beneficial for mental health.

Cheaper than therapy, right? No one would willingly deny themselves these benefits but there are two types of people that show up at concerts that are the buzzkills to your free (I get the Ticketmaster scars are real, but go with me) music high:

#1- The one with the agenda

This person (and it could be you) feels the need to keep to a strict schedule of getting there at x time, leaving at x time, hitting each artist for a certain amount of time, spending half a set or multiple sets walking back and forth to find the perfect place to watch an artist perform. The mental energy in this, not to mention the physical time spent, distracts from the music and the reason you bought tickets in the first place. Obviously, getting there to see the beginning of the concert makes sense, but after that, turn your mind to feeling all the feelings. And make sure that the people that you bring with you aren’t imposing their agendas on you. You don’t need totems–you don’t have to follow eachother unless you want to. The music is what matters, because it can really benefit you, and your friends will get a better version of you, the more you allow yourself the freedom to experience a concert without adding logistical stress to the experience.

This person can also have an agenda as well, see #1, as it relates to capturing the concert to prove they were there (you will never watch these videos again) or delivering a FOMO punch to their followers, or whatever the reason is they can’t put their phone down. Ironically, the FOMO is happening to them and maybe to you, in real time, if you are watching a concert through your phone screen or turning your back on the artist to capture you rocking out so hard with them in the background. There is something really powerful about not sharing your experience at a concert with anyone but yourself and the people around you. This feeling of being one with the music, I promise you, will deliver you far more profound happiness than any likes and shares your video and photos get. If you don’t believe me, click into that study above. Nowhere in it does it state that a phone raised in one’s hand contributes to the release of positive brain chemicals at a concert. You can’t be a videographer and be present. Choose to be present.

The best way to capture a concert is to buy merch (and the best way to help an artist). Do it without an agenda; wait in the line. It will all be ok, if you let it.